The northern lights are known as the bright dancing lights of the aurora. Interestingly, these lights are produced when electrically charged particles from the sun collide with gaseous particles upon getting to the earth’s surface.

What is Northern Light

In the south, these lights are regarded as AURORA AUSTRALIS and in the north as AURORA BOREALIS.

The aurora lights are displayed in several colors, but amongst all the displayed colors, the most widely seen colors are pink and pale green.

Other colors on the rank are the appearance of yellow, blue, red, violet, and green. These lights are displayed in various forms in the sky.

This ranges from arcs, shooting rays, streamers, and dispersed clouds of light. Whenever these lights come on, they give the sky an entirely different appearance.

The strange glow they produce is always too obvious to ignore.

In the year 1880, it was reported that the northern lights and the sunspot activity are one way or the other connected.

According to several pieces of research, above the sun’s surface, the resulting temperature is believed to be around millions of degrees Celsius.

Diving deep, this temperature is said to aid the frequent explosion of gas molecules upon getting in contact with one another.

Whenever the sun rotates, free protons and electrons are released from the surface of the sun.

These protons and electrons escape or pass through the available holes in the magnetic field.

Aided by the solar wind, these released charged particle moves towards the earth, and the earth’s magnetic field deflects them as much as it can.

Nevertheless, the earth’s magnetic field is not strong at both poles.

So as a result of how vulnerable either of the earth’s magnetic field poles can be, some of the charged particles can find their way into the earth’s surface thereby come in contact with gas particles.

Whenever the charged particles collide or come in contact with gas particles, the result is the emitted light known as dancing lights or Northern Lights.

Generally, the dancing lights of aurora go as far as Eighty kilometers to about six hundred and forty kilometers above the surface of the earth.

Why is the Northern Light Green?

The northern lights are bound to appear whenever gaseous particles in the Earth’s surface collide with the charged particles that are on the loose from the surface of the sun.

The change in colors is attributed to the type of gas particles that are in contact during that time.

As discussed earlier in this article, out of several possible colors that can be formed, the most prominent color is the GREEN.

The GREEN color is pale yellowish in appearance. This color is produced or derived from oxygen molecules which can be found within Sixty miles above the earth’s surface. 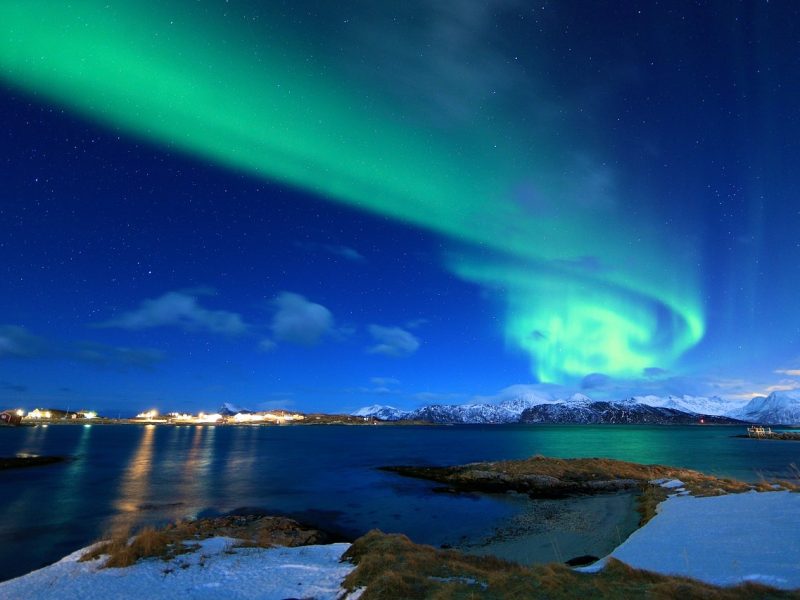 The oval shape is irregular and it is positioned over the magnetic pole for each hemisphere.

According to various findings by scientists, it was reported that in most cases, the northern lights at both hemispheres give similar images during the same period, and with related colors and shapes.

If you are interested in having a first-hand experience of what the northern lights look like, the best way to do this is by looking at the images that are captured using an improved DSLR camera.

The awesome experience that comes with witnessing the northern lights from the camera’s perspective is different from what is experienced in real life.

You may never know what the true color of the aurora is by mere looking at it.

This is because the relatively faint colors which the aurora produced at night is very difficult to see ordinarily by the human eyes.

Primarily, the human eye is limited to view the Northern Lights in faint colors and shade of white and gray.

In the case of the DSLR camera, it has no limitation. Modern cameras are equipped with longer exposure times and higher active vision range when it is dark compared to what a human eye can withstand.

Although, a lot of individuals have claimed to have seen more than a color when the Northern Lights glow at one point or the other. This can’t be rebuffed, as it is very possible.

This claim is also dependent on the position or location you are viewing from.

For instance, if you are viewing from the distant north, there is a high tendency that you will see more color because from such position, the aurora is believed to be stronger.

When you try to view the Northern Lights from areas or zones that are devoid of light pollution, you can as well make the best out of the light colors.

Such areas are considered as perfect places to take a look at the Northern Lights. Smaller communities in the north offer this privilege.

Also in the north, winter is regarded as a perfect season when you can get a clear display of the lights.

With the long moments of darkness and the rate of occurrence of clear nights, all things being equal, the winter season should be a perfect time to see the various display of lights.

On one of the clear nights, make sure you target very late in the night to catch this amazing display of lights. Midnight is perfect.

The myth about Northern Lights

According to various reports, the Northern Lights are approached or perceived differently by various regions and tribes.

For example, according to a long-standing belief, the Menominee Indians of Wisconsin are made to understand that the lights display where the Manabai’s wok is.

The Manabai wok as they are called were known as the spirits of Great fishermen and fearless hunters.

In Alaska, the Inuit have another different belief. To them, the lights represent the spirits of those animals they killed.

And some natives believed the lights represent the spirit of the dead.